A few weeks ago, I presented to you the release candidate of an all-new version of Sparrow, containing lots of new features and a completely revised architecture.

I’m really excited to tell you that the release candidate is now followed by the official release! During the last weeks, I gathered a lot of feedback about the new version, polished some parts here and there - and now, I’m finally removing the training wheels. Behold: we’re now officially launching Sparrow two point zero! 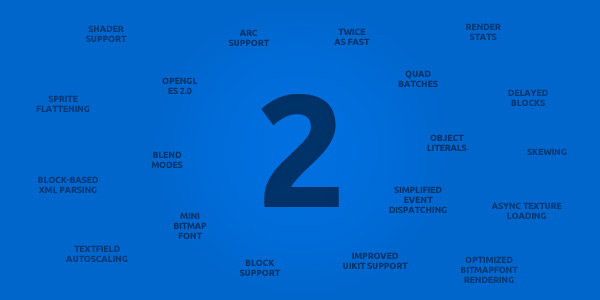 I already gave you a detailed tour of the new features in the release candidate post I wrote a while ago; but just to be sure, I’d like to summarize the most important changes again:

I think that’s well worth a 2.0 release, don’t you think? Many workflows that were previously a little difficult to pull off are now very easy to achieve.

During the last days, I had a look at every single page in the Sparrow Wiki and gave the manual a complete overhaul. Not only did I update it with all the new information, I also extended some of the existing descriptions to make them easier to follow.

Here is a list of documents that will be especially interesting for Sparrow 2.0 users - be sure to check them out!

Furthermore, I updated the list of extensions so that it distinguishes between v1 and v2 extensions; and while I was at it, I also upgraded the Particle System and some other extensions for the new version.

I hope you are as pleased with this new version as I am! I put a lot of effort into this new release and I believe it provides a very good basis for what’s to come in the future. Our bird is airborne again!

Don’t forget to send some greetings to the Sparrow in the comments below.
Next up: Starling 1.4 - stay tuned!