It’s been a while since we had a guest post on our blog! But when Johann Huang from SGN told me about the project he was working on, I knew we had to spread the word about this to as many developers as possible. Johann, thanks a lot for this amazing contribution!

I have been working on the Adobe Flash platform since 2010, from the dawn of Facebook gaming. At that time, we used Flash Professional to layout UI/map elements and to load the SWF directly into the game.

As mobile games and stage3d technology are getting more and more popular, we are excited to embrace Starling, the de facto 2D framework of stage3d for making games that can work not only on the web, but more importantly, also on iOS and Android devices.

When transitioning to Starling, everything went well, except for one drawback: Flash Professional only supports traditionally Flash. Thus, we had to change our workflow, and we came up with the following process:

Yes, it works; but due to platform differences between Photoshop and Starling, most of the time we didn’t get the same look in Photoshop and the game. Every time we made a new UI, it took us many iterations to make it look as expected in the game, which is pretty boring and time consuming. That’s why we came up with the idea of creating the UI tool!

Since Starling Builder and the game share the same code of creating the UI, it’s guaranteed to look exactly the same. Furthermore, you can tweak the UI and see the result without compilation within the editor, which is much faster than the old workflow.

If you feel the same way as I do, then it’s time to move forward! 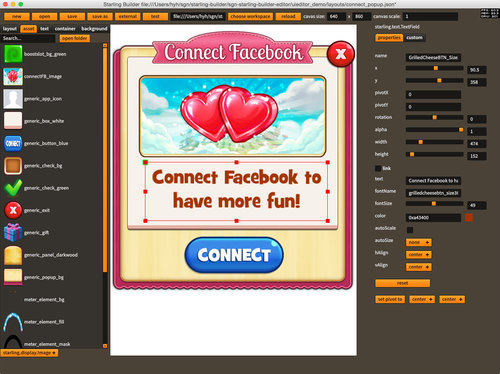 Starling Builder is not responsible for exporting textures, so you can use whatever workflow to do it. Just make sure to put them in the YOUR_WORKSPACE/textures folder. However, to help you with the whole process, there are two scripts in the tools folder inside the editor repository:

Again: the scripts have nothing to do with Starling Builder. Feel free to use whatever tools you are comfortable with.

You can start to create your UI elements using Starling Builder when you have your textures ready to use. Layouts are saved in JSON format. You can save them anywhere on your computer.

Put them into the game

Copy the engine code into your game, as well as the texture and layout files. Inside your game, you can simply do something like this to create the display objects:

The Starling Builder engine repository comes with a demo project, which you can check out for more details.

Editing Scale3/Scale9 regions by hand is sometimes a pain. Starling Builder provides a user interface for you to define scale3/scale9 region without hassle.

All the properties of the components are customizable through a config file. Find it in YOUR_WORKSPACE/setting/editor_template.json, or simply click on “Workspace → Edit Template” to open it. You can add and edit properties or components by modifying the file.

Here’s an example of adding the blendMode property to Image:

Sometimes you need to map a generic class the editor can recognize to a game-dependent class only accessible in the game. To do that, go to the “custom” tab and edit the customComponentClass field. Just fill in the fully qualified class name and Starling Builder will do the mapping for you.

If you want to use a Feathers theme in the game, it’s possible to put it into the editor, too. However, it’s a little bit more complicated than just dropping the files. 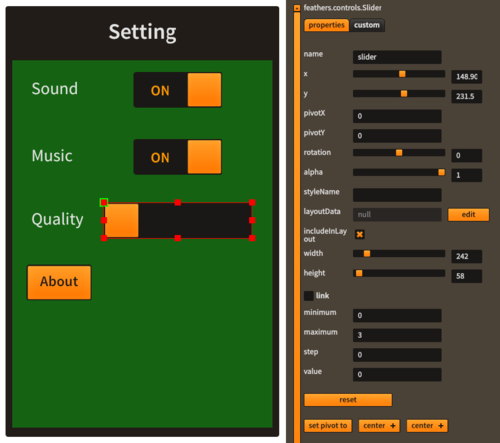 A very neat feature of Starling Builder is localization. In the editor, you can switch to different locales with a single click. There’s a default implementation that reads the the JSON text files with a simple data[key][locale] format. If you need to support your own format, you can implement ILocalization and replace the current one in both your game and the editor. 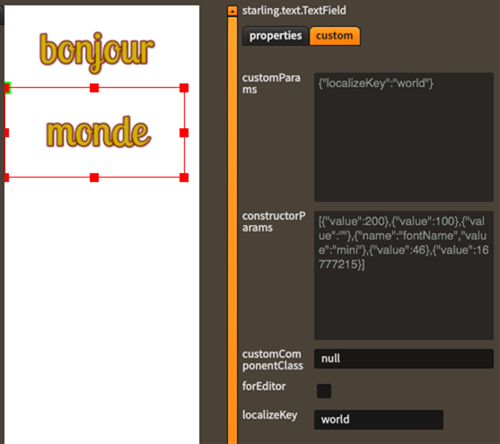 I’m Johann Huang from SGN. We are the fastest growing major U.S. mobile games studio, and have made popular social mobile games such as Cookie Jam, Panda Pop, Juice Jam, Sugar Smash: Book of Life, etc. Most of our games are powered by the Starling Framework and are universally available on iOS, Android and the web. We would like to contribute back to the community by making Starling Builder open source, hoping to increase the popularity of the Flash/Stage3d/Starling community.

For more information please visit the Starling Builder Wiki and our GitHub repository.