Starling JS flocking to the Away Foundation

When we first announced the JavaScript version of the Starling library on this blog and on the Adobe MAX, the feedback we received from you guys was phenomenal: A huge number of people showed their interest and encouraged us that we were on the right track.

However, many months have passed since then, without any words on Starling JS. What has happened? What’s the future of Starling JS? This blog post finally gives some answers!

When we returned from the MAX 2013, we were in high spirits: everyone seemed to be thrilled about the new library, which was a huge motivation for us to get it out the door as quickly as possible.

However, just a few days later, we received a heavy blow: the main sponsor of the library jumped ship, leaving the project without funding. The whole endeavor was at the risk of failure.

However, we were not willing to give up so easily! We had achieved excellent results with our prototype in quite a short time, so we thought we’d still be able to continue. We’d have a beta ready in summer 2013 and use that to attract sponsors — right? 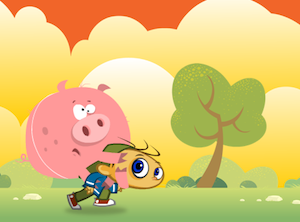 Wrong. With the lack of additional sponsor money, we could only afford to pay our developer Werner half-time; which meant that progress got much slower. Add to that lots of technical issues (TypeScript being a fast-moving target; browser incompatibilities all over), and the beta got delayed without end.

In December, we finally put a brake on the project and evaluated realistic ways to continue. We considered several options, but none of them looked especially realistic, so Starling JS seemed to be on the brink of cancelation. All of the time we had invested — should it all have been in vain?

That’s when our good friend Robert Bateman from the Away Foundation came to the rescue and came up with an idea that promised to help us both!

The team behind Away3D recently published a TypeScript version of their 3D framework, with great results. However, they felt that 3D was not enough: they wanted to be able to offer their clients a complete solution, and that also includes a 2D library. We, on the other hand, were looking for someone who could take over the code we had produced so far and finish it.

In other words: a perfect match! Furthermore, the Away3D team had already created a special low level library encapsulating WebGL (think of it as Stage3D for TypeScript), which would be rather easy to integrate into our existing code base.

So, in short: The Away Foundation takes over the development of Starling JS in the future! Right now, they are already working with our existing code base, integrating their new core library and putting the project on the fast track for a release. The latest blog post of Robert Bateman contains the details!

Believe me, the constant delays and broken promises on Starling JS at the end of last year were a huge burden for me. So I can honestly tell you that I am extremely relieved and happy about this collaboration!

With the Away3D Foundation taking over, a skilled and experienced team will guarantee that our initial ideas for Starling JS will come to life. At the same time, I can take all the time I need to continue my work on the ActionScript version of Starling, giving it the attention it deserves.

Thanks to the help of our friends of the Away Foundation, our latest bird will be able to launch, after all — and that’s making me really happy! Do you feel the same? Please add your comments below, I’d love to hear what you think about all that!