It’s been a while since the first official Sparrow version came out, and many of you are eagerly waiting for the next version. Heck, the features page says that audio support will be added in the next few weeks - since months!

Guys, we are really sorry for the delay. We were busy at many different sites at once, and it showed. Some of you might have seen the update of PenguFlip, which included an online highscore system and a cross-promotion feature. Furthermore, we are working on the next Sparrow-powered game: “Twins”. And that’s just the tip of the iceberg …

But, finally, we are putting the finishing touches on the next release. The sound engine is finished and supports many different sound formats, without you having to care. The promised movie class works similar to what I showed in the last blog post, but with a few nice additions. There are new transition types that look really cool. And lots of bug fixes and improvements were applied behind the scenes. The feedback you provided us with in the forum and via mail is invaluable for us - thanks a lot for your support! 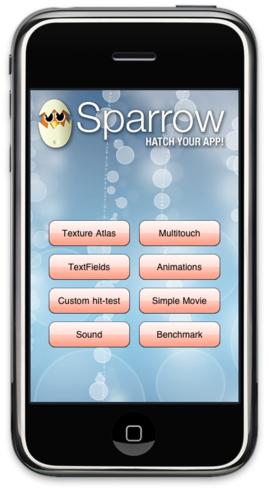 Expect Sparrow 0.8 within the next days. As soon as all our tests are finished and everything works as flawless as we want it to, we will upload it and inform you right at this place :-)